Welcome to HTMLForums; home of web development discussion! Please sign in or register your free account to get involved. Once registered you will be able to connect with other members, send and receive private messages, reply to topics and create your very own. Our registration process is hassle-free and takes no time at all!

You are using an out of date browser. It may not display this or other websites correctly.
You should upgrade or use an alternative browser.

Help me design a markup language and help UBI

Hello. My co-editors and I have developed a Master Directory to Universal Basic Income.

As you can see these are Google Docs pages which was useful when we first started. But now we want to convert some 200 documents to actual web pages. I looked into using various frameworks (such as Jekyll) but I am strongly leaning towards a different approach.

I want the pages to be editable by regular folks with no web experience or knowledge of Google Docs (or Jekyll etc.). Of course I would like to impose many style guides. I think the best way to accomplish this is to develop our own very simple markup language (MDML). In my mind we would keep the source for the MDML in each web page of the Directory where it could be edited and expanded by any editor of the Directory.

When any page of the Directory was accessed for viewing, the MDML would be converted automatically to HTML (by a built-in JavaScript transpiler) and the HTML rendered for viewing.

My first draft of the description of MDML (Master Directory Markup Language) is here: 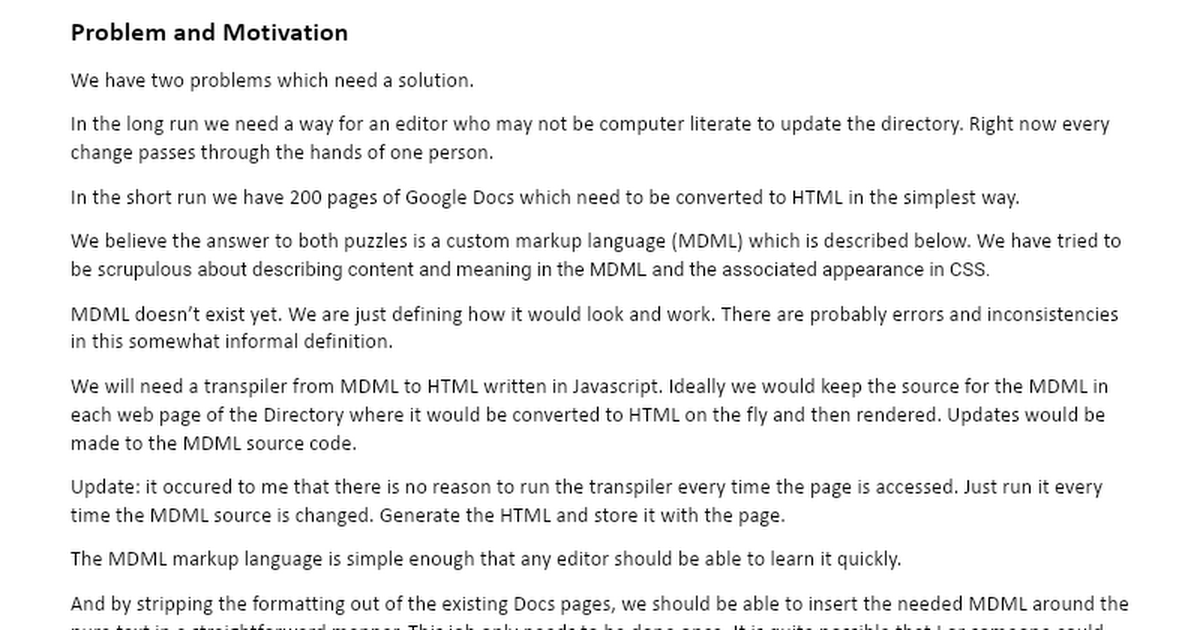 Note example of use at end of document.

I would love to get feedback on ambiguities or inconsistencies in this draft. Also suggestions on how to describe the markup language better.

Any and all comments will be appreciated.

[In response to the suggestion that I use the MediaWiki framework.]

So it seems that MediaWiki is the engine behind Wikipedia (and many similar web sites). Interesting. The HTML it uses is as least superficially similar to Markdown.

So if I wanted to create a wiki for everything in the universe with some relation to Robert Heinlein, that would probably be the software I would choose.

Or more to the point: if I wanted to create a wiki for universal basic income (an interesting idea) it would be smart to latch on to MediaWiki. In such a wiki anyone could talk about anything as long as it had a relationship to UBI. And there would be few restrictions on the format of an article.

Now we can see why I would NOT WANT TO USE MEDIAWIKI for the UBI Master Directory.

* I don't want just anyone to edit the Directory. Only a select group of editors.

* I don't want to allow a wide variety of formats. In fact there is only one very specific format allowed.

* I want to require certain types of research such as always having a biographical link for every author we encounter.

* I want to funnel articles into a maximum of 26 topic sections (currently 22).

MDML describes everything semantically. For example there is no way to say: "Display this text in italics." But you can say: "This text is a book title," and it will (probably) be displayed in italics.